How can we help you today?

How do I start an Ad Hoc task?

Ad hoc tasks are like a digital post it note that you can use to handle small pieces of work, reminders etc. that come up on an as-needed basis but don't warrant setting up a whole job and/or service. Examples of when an ad hoc task might be useful include needing to update a client record, contact a client, check for missing data from a client list.

Ad Hoc tasks don't have the option to recur, as they are designed to be one-off tasks outside of any pre-configured Jobs. There are two main ways to start an ad hoc task - from the Client Record, and from the Work Menu.

Creating an Ad Hoc task from the client record

When on the client record, you can kick off an Ad Hoc task via the Work Tab: 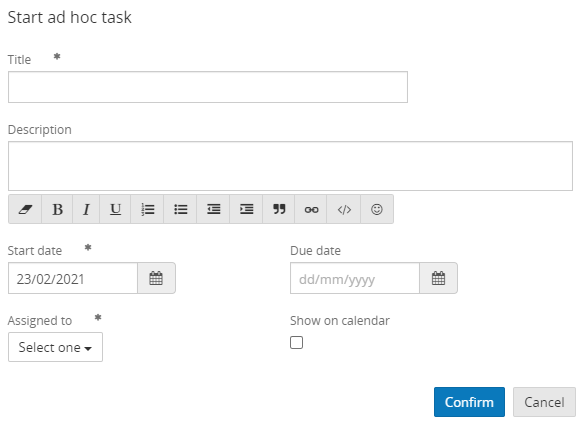 You can enter a name and description for the task, assign the task to someone to complete, set a start and (optional) due date, and select to show the task on your Task Calendar: 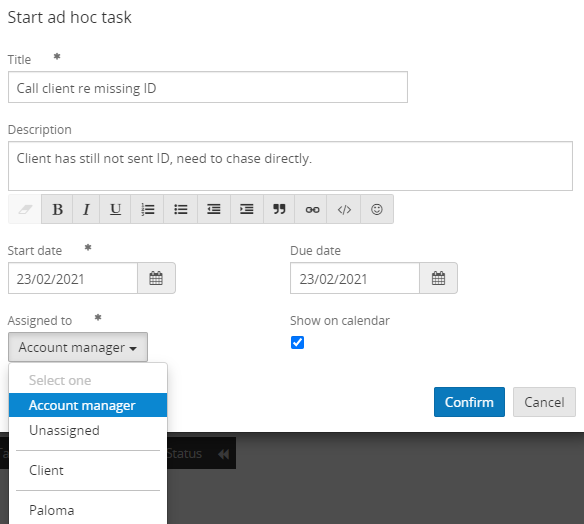 When you're happy with your task configuration, click the blue Confirm button. You'll be able to view your task in the Ad hoc tasks area of the client page:

It will show as a standalone task, with the usual start (and optional due) date information. You'll be able to mark the task as completed, change various parameters of the task such as the assignee or dates, and update information.

The assignee will also be able to view the task on their Task Calendar (this will show on the same day as the start date of the task). 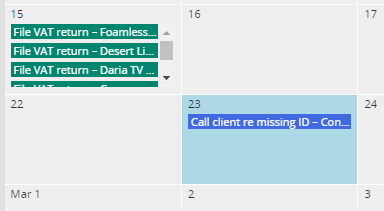 Clicking the task from the calendar will take you to the Ad Hoc Tasks list.

Creating an Ad Hoc task from the work menu

The other place you can create an Ad Hoc task from is the Work menu:

You'll be taken to a page where you can configure an ad hoc task that isn't related to a client: 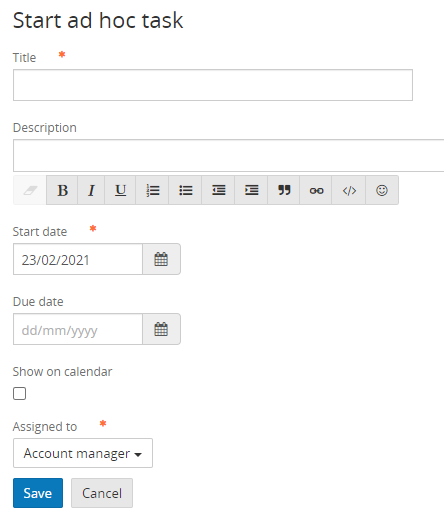 You'll be able to set up the same information as for a Client Ad Hoc task, except for the client itself: 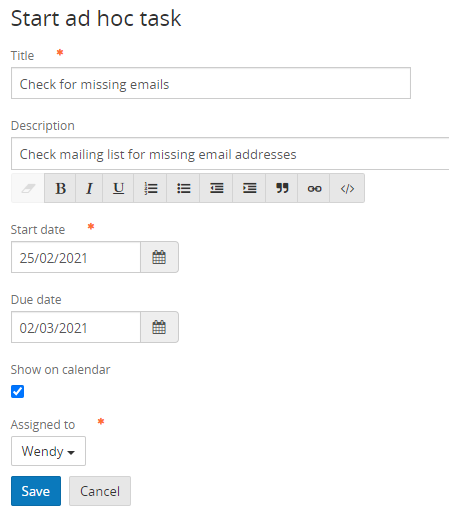 And these will also show on the assignee's Task Calendar:

Clicking the task from the calendar will take you to the Ad Hoc Tasks list.

When an ad hoc task is completed, it will be grey and with a strikethrough line on the task calendar:

You'll still be able to uncomplete and redo the task if needed.

As well as from the Client record and the task calendar, you can view Ad Tasks from the Work menu:

This will bring you to a list of Ad Hoc tasks filtered to the user that is logged in:

This list can be filtered in the same way as the standard Task Lists, using the green filter dropdowns:

You can also go directly to the main Task list and select Ad Hoc from the "Jobs" dropdown:

How do I kick off ad hoc jobs?

Creating a task from an email

Did you find it helpful? Yes No

Send feedback
Sorry we couldn't be helpful. Help us improve this article with your feedback.